QE for People: Highlights from conference in European Parliament On February 17th 2016, three Members of the European Parliament hosted a conference in the Parliament to initiate the debate about alternatives to quantitative easing – know as QE for People. The conclusion of the event was that QE for People was both possible and necessary in the eurozone.

MEP Molly Scott-Cato opened the conference with optimism, expressing her support for “such an obvious solution to some of our most serious economic problems”.

Positive Money’s researcher Frank van Lerven initiated the conversation by making a concise presentation on the main conclusions of the report “Recovery in the Eurozone, Using Money Creation to Stimulate the Real Economy” published by Positive Money earlier this year. According to van Lerven, all transmission mechanisms of the ECB monetary policy are not working very well which explains why the QE programme is failing to reach the real economy.

The next speaker was a special guest, Professor Richard Werner, who first proposed QE when he was advising the Bank of Japan in 1995. Werner described what he had meant at the time: “the original definition of QE was money creation for transactions contributing to GDP,” he explained “but central banks have made a hash out of it.”

Werner also reminded the audience of how money is normally created, describing the way private banks create money when they make loans. As a consequence of the private banks’ monopoly on money creation he stated, “central banks have not created money for the public good for several decades” and that is what we need to address. Richard Werner proposed a ‘Strategic QE’ for sustainable investments and co-wrote a report with the New Economics Foundation (which is also supporting this campaign).

Eric Lonergan followed with a persuasive presentation on why the ECB should distribute a citizens’ dividend to every household in the EU. According to Lonergan, this so-called helicopter money plan is ultimately the only way to cope with the next recession. It could play the role of a contingency plan which the eurozone does not have now.

Lonergan emphasized the fact that this proposal is in fact very conventional economics, and it would be a quite modest policy compared to the size of the current QE programme. According to Lonergan, we would need something like 2-5% of GDP (600 to 1500 euros per capita) to close the output gap in the eurozone. Which only represents a fraction of the scale of the current ECB’s quantitative easing programme.

Moreover, Lonergan thinks cash transfer are superior to fiscal policies in the sense that helicopter money would be more immediate as opposed to democratically decided fiscal policies

He insisted on the fact that not only this option is legal, but it is in fact a legal obligation for the ECB, as it is ultimately the best way to meet its objective of price stability.

He also raised concerns about the current debate about using negative interest rates to stimulate the economy, arguing that “there is no evidence that they work”. In comparison, QE for People would be far less experimental, Lonergan reckons.

Frédéric Boccara, Advisor for the French Government, emphasized the drawbacks of the current QE programme on increasing inequality. He argued we need another quantitative easing which would “support people’s developments and qualifications, and support good, ecological production, with good jobs”. He proposed that QE should finance both public services and small businesses by the creation of a “European Fund for Common Ecological and Social Development”

Such fund would have access to the ECB’s monetary financing lines in accordance with the Art. 123.2 of the Lisbon Treaty, which allows publicly-owned credit institutions to have access to ECB fundings. In addition, the ECB should revise the way it is refinancing schemes for banks so it benefits the real economy.

Finally, Frances Coppola reviewed all the different objections and obstacles to QE for People. The first is a psychological one: the idea that people should get anything for nothing is not an acceptable argument in the mainstream. 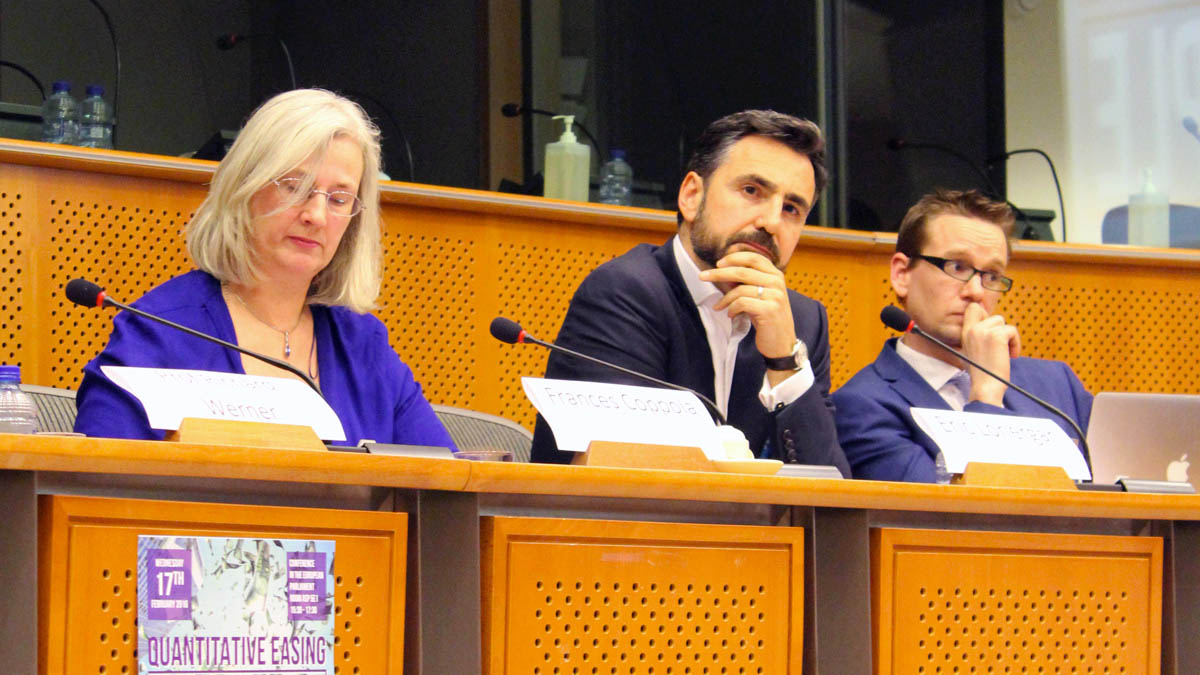 The second issue is how those proposal could fit in the ECB’s mandate. Currently, the ECB is not meeting its inflation target, and this is precisely why QE for People is an interesting proposal. According to Coppola, concerns about hyperinflation are overrated, since the ECB would still have its ordinary policy tools if necessary to withdraw money from circulation. “The idea that money issued directly to the real economy can’t be pulled back again is simply wrong.” Coppola said.

Coppola also emphasized the complementarity between QE for long-term support of investment and short-term boost for demand with a citizens’ dividend.

From the audience, Frank Vanaerschot from FairFin, emphasized the urgency of Green QE: We know that it’s technically and economically feasibility to have 100% renewable energies in Europe by 2050, but the start button isn’t there because the banks won’t finance it. QE would be interesting for this”

MEP Molly Scott-Cato emphasized the need to think beyond only GDP and therefore dedicate her priority to the Green QE approach. ‘You learn very quickly when you come here at the Parliament that you start off doing what is possible. And having the ECB buying the European Investment Bank bonds is just begging to happen, so that’s why i’m personally focusing on that” 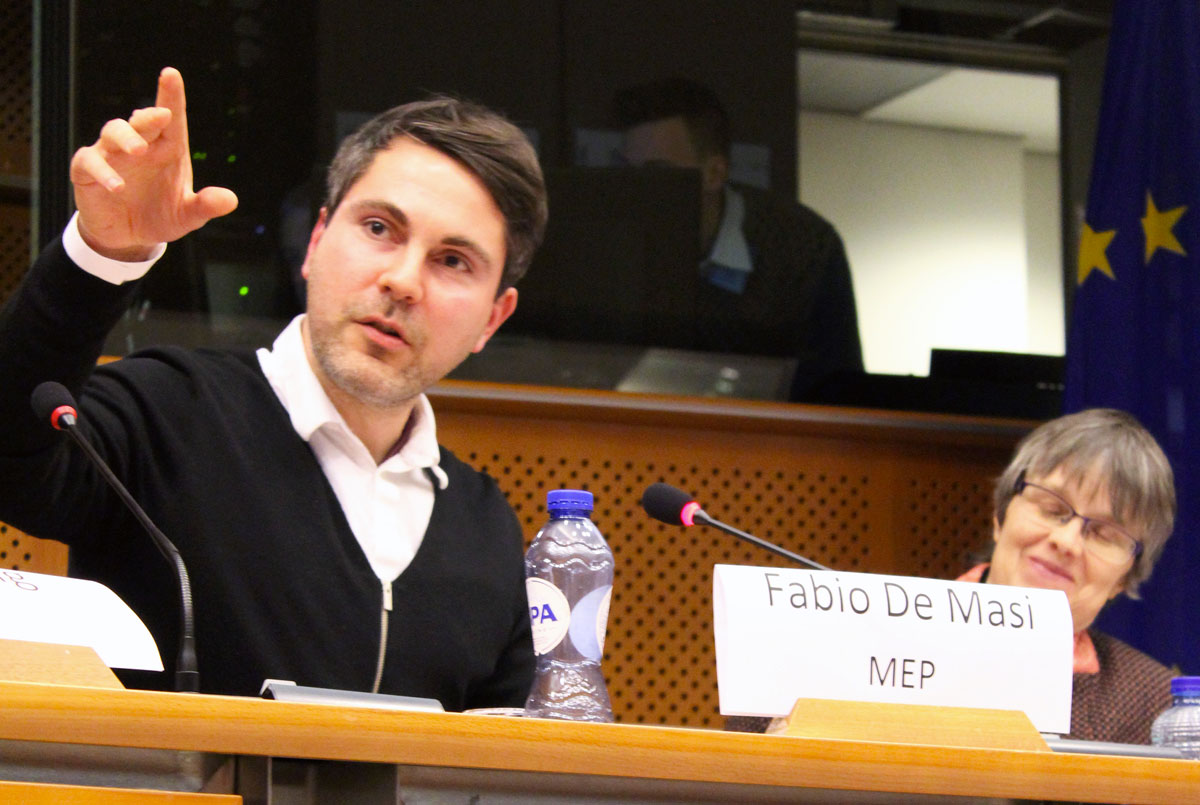 German MEP Fabio de Masi also shared the view that the ECB has a clear obligation to do QE for People, and to facilitate the financing of investments programs either at the EU or national level. De Masi expressed his preference for investment over citizens’ dividend, on the ground that investments are key to structural changes. Moreover, “Distribution issues are social conflicts between capital and labor, and i don’t think we have a magic stick to fix this”.

Will we need another recession?

“What would Milton Friedman think about this meeting” MEP Paul Tang wondered. “He must be at horror because he is the one who introduced the idea and now we are turning it upside down because he was a proponent of a passive government policy, and we want the opposite.”

“This discussion is very relevant, because I am deeply concerned about the economic state the Europe is in” Paul Tang said, going on to say: “As an economist I am concerned about the lack of investment, which makes it more difficult to escape the problem of private debt and stagnation. I am afraid things will need to get worse.”

“The key thing here is that Europe has to show leadership and innovation.” Lonergan claimed. “The most depressing thing that’s going to happen is another country will do this and we will copy them afterwards, having waited for 2 or 3 years and wasted economic, social and human resources. That is an absolute disgrace.”

He went on: “I don’t think it has been considered seriously so far. Helicopter money has been explored in a very poor way, the ECB should devote proper resources to it.”

Eric Lonergan concluded by saying that QE for People would be a modest move: “Mario Draghi have taken very brave and controversial decisions, I do not think it is a huge move for them to go and make monetary injections to individuals or households. Will it be democratically legitimate for the ECB to do this? Well the fact is, it would probably be the best thing people would have seen in the eurozone for a very long period of time”