Corporate QE will not help the ECB achieve its own objectives, it is making multinationals richer and is ultimately jeopardizing the reputation of the ECB.

In March 2016, the European Central Bank announced an extension of its asset purchase programme (QE) to a larger pool of assets, which now includes corporate bonds. In practice, this means the ECB is now also purchasing debt from private corporations, including on primary markets (something it is not doing with sovereign bonds). So far, the ECB has bought 12 billion euros of such assets. What is the rationale behind this new approach and why is it likely to fail as traditional QE has?

The hope of the ECB is that corporate QE will make it easier and cheaper for private companies to access funding. Not all companies do benefit from it though.

Overall, the list of bonds released by the ECB shows that the main beneficiaries are French and German multinationals; listed in the most prominent equity markets, such as the French CAC 40 or German DAX.

The list includes French companies such as oil producer Total, insurance company Axa, alcoholic beverages producer Pernod Ricard, or food manufacturer Danone. Then from Germany  there is the biopharmaceutic company Bayer, and car manufacturers BMW, Daimler, or even the infamous corporation Volkswagen which went under the spotlight recently after having cheated on the carbon issuance levels of its cars.

The ECB is buying these bonds because they are the least risky companies on the market. By buying such bonds, the ECB intends to push down the market interest rates that those companies are paying.

But do these companies really need easier access to cheap financing? Thanks to the already super low interest rates of the ECB, big multinationals already do have access to very cheap money from financial markets or bank credit lines. While average yields in the Eurozone`s corporate bond market fell to a one-year low – they have been equally low for a very long time.

Even if they did need more cheap financing, it is not even clear whether those companies would use it for productive investments. For example, the German company Bayer is currently trying to buy the big US multinational Monsanto. So now the ECB is basically subsidizing this merger. Evidence shows mergers and acquisitions hardly ever have benefits for the real economy, so it is unlikely this financial venture will produce more growth for the Eurozone.

The latest Bank lending survey of the ECB showed that ‘Merger and acquisitions’ was the first contributing factor of the growth of credit lending in the euro area. Instead of investment into the real economy, mergers and acquisitions often mean internal restructurings programmes, lay-offs, and eventually lead to a higher concentration of markets into the hands of a fewer number of enterprises, thereby reducing competition.

What this shows is that a number of large companies are currently trying to take advantage of the favorable lending conditions to capture their competitors, but not for investing more into the real economy.

Corporate QE will not boost demand in the eurozone

While some big corporations may benefit from this policy, it is very clear that small and medium sized companies will not. But SMEs are the most likely to contribute to job creation and higher wages – they form the backbone of the real economy.

By helping the multinationals, and pushing down financial returns on their bonds, the ECB is hoping that investors will move away from those big corporations, and will instead invest more into riskier businesses (the so-called ‘portfolio-rebalancing’ effect). However, this is very unlikely to happen; unlike in the US, very few European SMEs seek funding via bonds markets. European SMEs mostly favor bank loans  so the corporate QE programme is unlikely to trickle down into cheaper finance for SMEs.

Another issue is that the corporate bond purchases are more likely to favour certain countries, where companies are considered less risky by ratings agencies and markets in general. Obviously, companies are considered less risky when they operate in an environment where growth outlooks are best. As a consequence, countries where a boost in demand is most needed (such as Greece, Italy, and Portugal) are less likely to directly benefit from the ECB’s monetary stimulus.

Not only does corporate QE fail to improve the current monetary policy plan, but it also endangers the ECB’s reputation over the long run, )by politicizing its actions.

With corporate QE, the ECB is basically picking winners and losers. As the ECB’s former chief economist Otmar Issing puts it: “this implies selective actions of the ECB, and in my opinion monetary policy should be as little selective as possible. It’s also a discrimination against SMEs.”

The ECB is likely to deny this accusation, by arguing that it is buying bonds from a diversity of ‘market participants’, in order to preserve the neutrality of its actions. Yet, as we have demonstrated above, the ECB is de facto favouring multinationals that have a certain size and that are located in certain countries with developed access to bonds markets. Something that will be increasingly more difficult to justify as more and more people are aware of this.

According to the Eurobarometer, already 47% of the European people don’t trust the ECB. This number is likely to grow when they learn that the ECB is subsidizing unpopular multinationals. Over the long run, this situation could become disastrous for the reputation of the ECB.

On top of that, the corporate QE programme also has transparency issues. The ECB has released the list of ISIN numbers of all the bonds which it has purchased so far, however the list provided does not include the volume of the purchases, making transparency very limited. Moreover, the ECB’s publication is a very undigestable list of ISIN numbers (see the example below, from the Bank of France), something very obscure and time consuming for citizens to understand. The German Bundesbank however does provides the names of the companies in plain english, which proves that the ECB could  technically do it as well. This leads to the conclusion that it does not want to make it easy for it to be scrutinised. 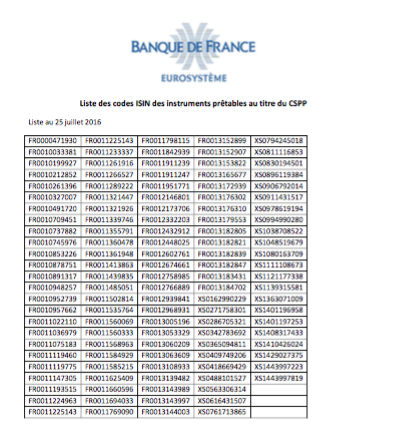 The ECB can and must do better

The corporate asset purchase programme of the ECB raises many questions. And most of the answers we can find lead to the same conclusion: buying corporate bonds was a bad idea to start with. It will not help the ECB achieve its own objectives, it is making multinationals richer and is ultimately jeopardizing the already weak reputation of the ECB. In other words, corporate QE is counter-productive. It essentially takes a bad idea of regular QE, and makes it a whole lot worse!

There are also legal grounds for the ECB to consider better ways. As stipulated in Article 2 of the ECB’s statutes, the ECB is bound to “support the general economic policies in the Community with a view to contributing to the achievement of the objectives of the Community” as long as it does not “prejudice to the objective of price stability.”

We believe the ECB is not complying to its mandate here and it is legally bound to seek ways to improve its programme.

Over the short term, one way to fix that would be – at the very least – to come up with transparent criteria for selecting the companies it will be financing. To be aligned with the objectives of the EU, those criteria should be based on the social, economic and environmental impact of the bonds it is purchasing. For example, the design of the criteria and the selection of the bonds could be operated in cooperation with the European Investment Bank and/or its national equivalents.

This is a modest suggestion, far from the more ambitious proposals that Positive Money Europe advocates for. However, that would be a welcomed first step towards making the ECB’s policies more beneficial to the overall economic situation in the euro area.