In its newest report, the campaign “QE for People” makes the case that the European Central Bank could legally and independently distribute money directly to all citizens as a way to quickly address the lack of demand in the economy.

The QE for People campaign just released a new policy paper entitled “Citizens’ Monetary Dividend – Upgrading the ECB’s toolkit”, which aims at demonstrating that the ECB can and should be able to distribute newly created money directly to citizens in case its usual tools do not work. 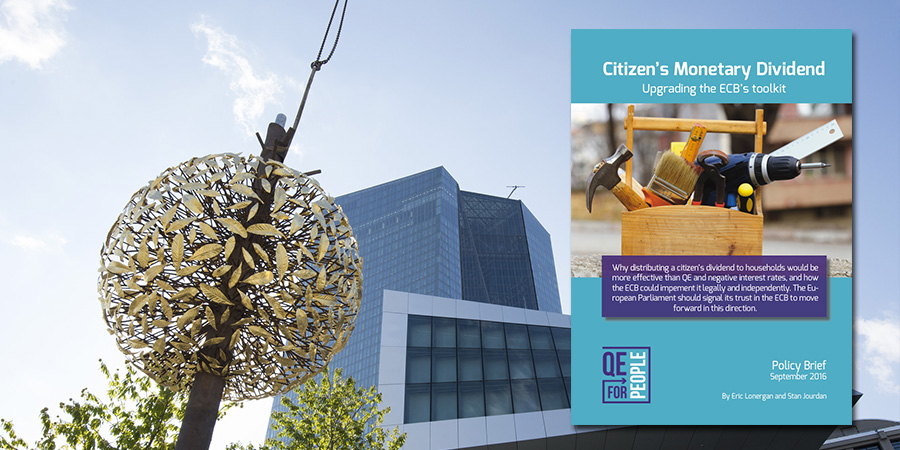 The main contribution of this report is to show why a citizens’ dividend by the ECB can be justified on legal grounds as a monetary policy instrument. This key points foes against recurring claims that such a scheme would amount to “fiscal policy”, and is therefore not something central banks can do.

“Simply put, a citizens’ dividend is clearly within the ECB’s mandate so long as it is designed and implemented by the ECB’s own initiative for the single purpose of price stability, and does not involve national or EU fiscal authorities.” co-author Eric Lonergan says. This point is particularly clear within the legal framework of the Eurozone where the ECB is strictly prohibited from financing government’s budgets.

The report points out to various key advantages of the proposal, including the fact that it would be far less risky than QE and negative interest rates, and its economic effects would be more evenly distributed across Eurozone member states.

Key points in the paper

• The ECB has no contingency plan if the eurozone falls into another recession. Fiscal stimulus and structural reforms, albeit desirable, are not actionable in a timely fashion in case economic conditions deteriorate rapidly.

• The ECB could instead use its ability to create money to finance a one-off payment to all citizens – a “citizen’s monetary dividend (CMD)”. This is technically possible under the framework of the ECB’s TLTROs scheme.

• A citizen’s dividend has more potential to boost aggregate demand. It is both economically effective and less risky than QE or negative interest rates. A stimulus equivalent to at least 3% of the Eurozone GDP would be necessary.

• A citizen’s dividend policy is clearly within the remit of the ECB’s price stability mandate and – if implemented correctly – does not jeopardize the central bank independence.

The report was recently distributed to all Members of the European Parliament who are seating on the Economic and Monetary Affairs Committee. “This is a very useful reading which I hope will help us to reflect on this topic” Spanish MEP Jonas Fernandez (S&D) said.

The ECB President Mario Draghi repeatedly said the Governing Council of the ECB have not discussed the idea. “The ECB is either lying or unprepared.” the campaign coordinator and co-author Stan Jourdan said. “There has been so much discussion about helicopter money since Draghi himself said the idea was “very interesting”. It is very disappointing that the ECB has not been able to produce an informed opinion about its potential economic viability. After all, if central banks are supposed to be the experts on monetary policy, they should not be afraid to take part in the conversation.”

The report can be downloaded here.