QE for Corporations: 15 MEPs call for transparency from the ECB A cross-party group of Members of the European Parliament have co-signed a letter to Mario Draghi asking the European Central Bank to be more transparent about its purchasing of corporate bonds.

Update 8/06/2017: 38 MEPs have now joined the initiative after Draghi opposed the call for greater transparency.

Almost a year ago, the ECB expanded the scope of its quantitative easing programme to corporate sector bonds. The move was intended to increase the effect of QE on the market.

As we wrote at the time: the implications of this programme are very questionable. It is ethically problematic, environmentally dangerous, and the economic logic behind it is rather dubious. But perhaps the most astonishing issue is the lack of transparency of the programme.

As we speak, the ECB has bought around 82bn euros of private bonds and is intended to keep doing so until at least December 2017. As the little data released by the ECB reveals: most of those bonds are issued from large multinationals, including many companies involved in fossil fuel and other polluting industries. This led a number of NGOs to question the ECB and call for a more appropriate policy, aligned with the European Union’s commitment to mitigate climate change.

Amidst the growing controversy and unpopularity of the ECB’s “QE for corporations” programme, fifteen Members of the European Parliament have also decided to take action.

In a written question jointly signed, MEPs from seven countries and six different political groups argue the ECB should take a series of measures to improve its transparency standards. We are extremely happy to see that the proposed measures are very much aligned with the recommendations we formulated earlier.

Certainly the most important point is the company-by-company disclosure of the amount of the Eurosystem’s purchases.

Today, the ECB only reveals the list of companies whose bonds have been purchased at least once, but it doesn’t reveal how much money it invested into each bond. In our view, this is an insufficient level of transparency since it does not allow any scrutiny of the possible bias of the programme towards certain privileges, companies or sectors.

“Citizens have the right to know if there are companies being discretionally propped up through monetary policies by some national central banks,” said Catalan MEP Ramon Tremosa to the Financial Times. 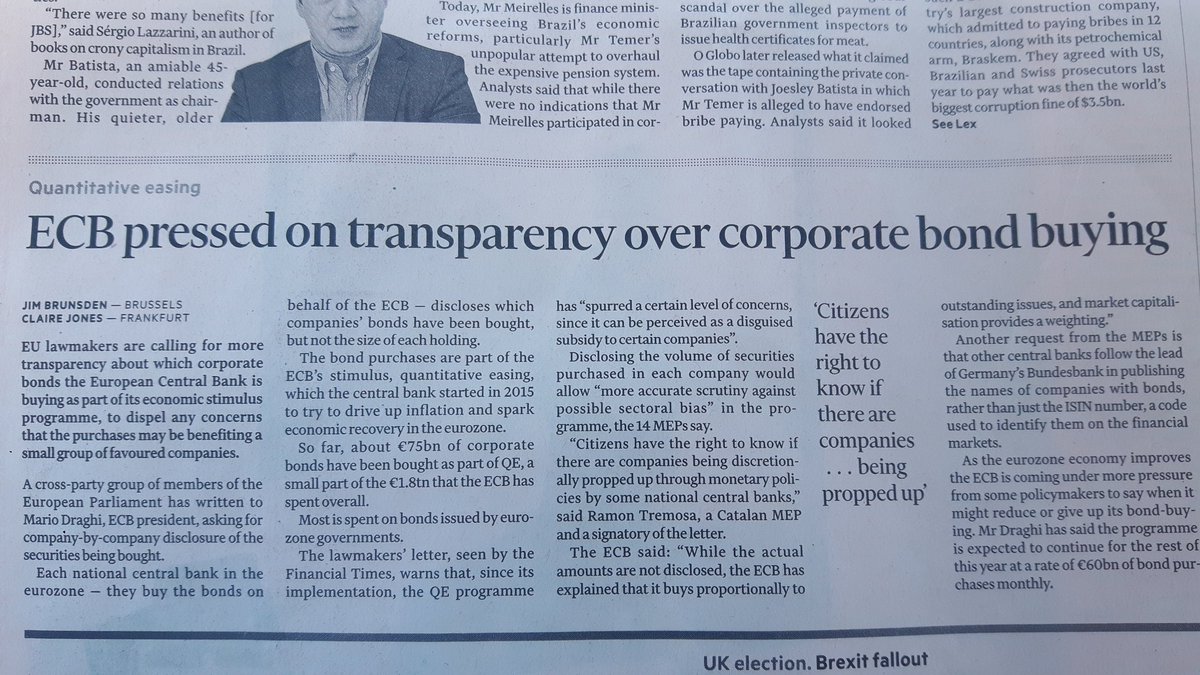 Thanks to this initiative, it will now be more difficult for the ECB to ignore our call for improving the programme. Under EU law, the European Central Bank is obliged to respond to written questions by MEPs. It usually takes around 6 weeks before the ECB’s response is made public.

The ECB has persistently claimed that its corporate programme is sectorally neutral, meaning that its purchases are representative of the existing market (and therefore do not privilege any particular sector). If the ECB is so confident that its programme is correctly designed, then why should it fear being transparent about it?