The European Central Bank’s minor improvements to the transparency policy of its corporate bond purchase programme fails to address our main demand.

Today the European Central Bank announced on Twitter that it would soon release a more comprehensive list of private sector bonds it holds as part of its corporate quantitative easing programme (CSPP). In practice, this new transparency measure will mean that the ECB will not only disclose an opaque list of the ISIN codes of the individual bonds being purchased, but also the companies’ names, the bond maturity and interest rates.

As of Mon, 26 June the ECB will publish a list of holdings under the CSPP, including the ISIN, issuer, maturity and coupon rate

The ECB’s announcement follows a series of repeated calls to the ECB by civil society organisations and Members of the European Parliament to improve transparency in its quantitative easing programme.

About a month ago, 15 MEPs led by Ramon Tremosa took the initiative to write an official letter asking the ECB to enhance transparency. A few weeks later, Mario Draghi declined to take steps towards transparency during a hearing at the European Parliament on 29th May. Disappointed by Draghi’s refusal, more MEPs joined the initiative. 38 MEPs signed the letter to the ECB – a record-high for such letter to the ECB. At this point, it was clear that the ECB could no longer ignore the call.

In that sense, the ECB’s decision is a demonstration that the European Parliament can have an influence on ECB policies if it formulates sensible proposals.

While the ECB’s decision is a move in the right direction (conceding to some of our demands), the announced improvements remain marginal ones. In fact, the ‘new’ information that the ECB will provide is already available to the public by looking up individual ISIN codes online (a cumbersome process though).

The ECB’s new practice will only make it far easier for citizens to scrutinize and analyse the ECB’s programme. This is obviously a good thing, but not enough. 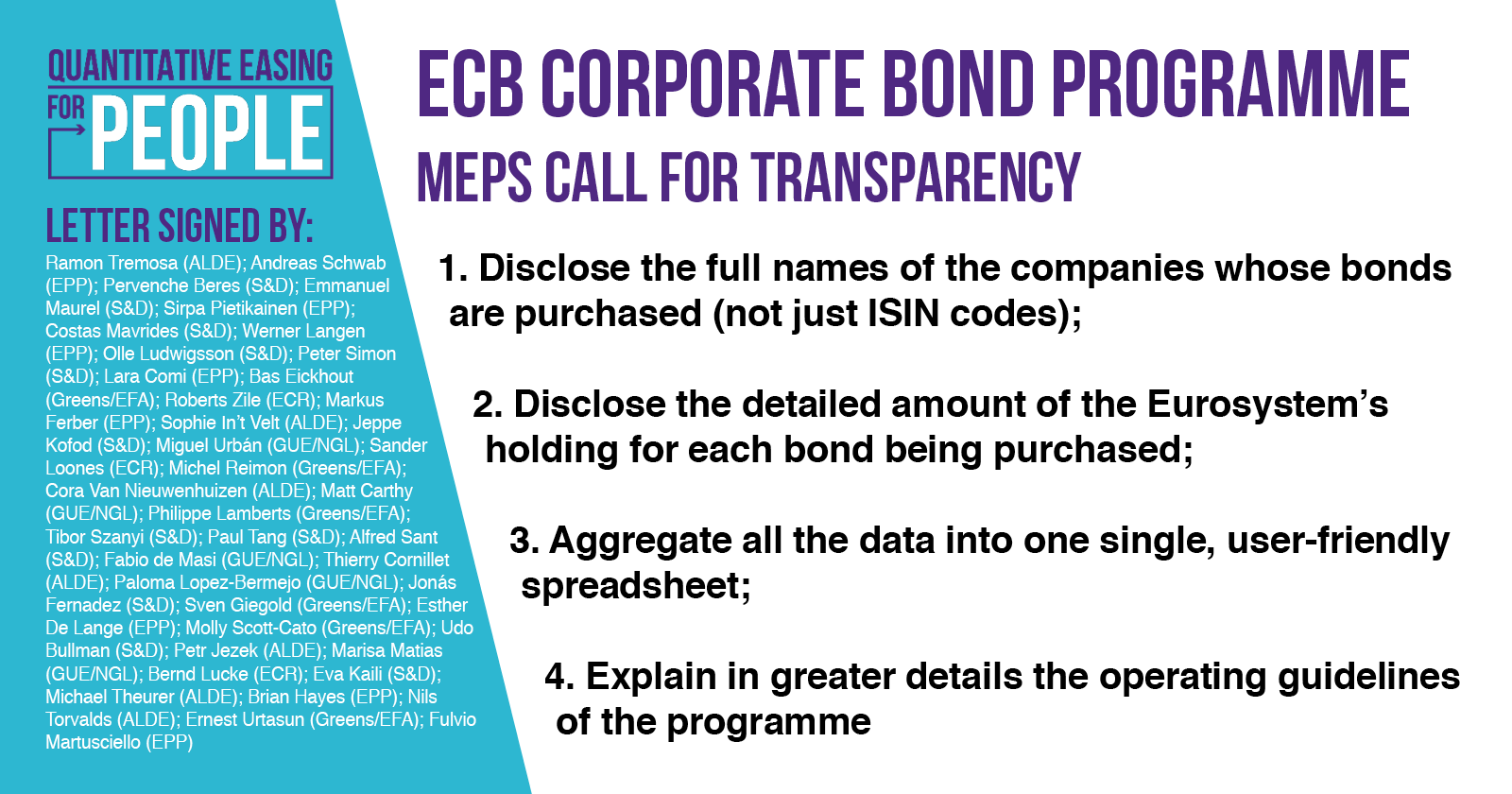 As we wrote before, the most important transparency demand is the company-by-company disclosure of the volumes of bonds being purchased by the ECB. Such a measure would allow citizens to check, by themselves, how much each company is benefitting from the ECB’s programme and eventually to assess the overall sectoral impact of the ECB’s activities.

But the ECB is still refusing to do this and its defense line against volume disclosure is rather weak. The ECB claims that disclosing the purchases volumes would distort market reactions, as some investors might anticipate the ECB’s upcoming purchases and adapt their behavior accordingly. We think there is an easy way to avoid this problem by disclosing the data only after a certain delay.

The ECB is already disclosing the volumes of government bonds being purchased under QE, allowing citizens to know which countries benefit most from QE. We fail to see why the ECB would not apply the same policy for bonds being issued by the private sector – an area where even more transparency is arguably required to reassure the public that no corporate has undue privileged access to ECB funds.

We therefore welcome the ECB’s announcement and encourage the ECB staff to devolve even more of its thinking on ways it can further improve its transparency standards.