A recent report by the European Economic and Social Committee questions the effectiveness of the ECB’s monetary policy for the real economy, and argues the ECB should work more closely with the European Investment Bank.

In 2015, the EU Commission set up a new EUR 315bn investment plan, financed through a convoluted and leveraged scheme, the European Fund for Strategic Investments (EFSI). Around the same time, the ECB decided to inject more than EUR 1.1 trillion into the financial markets, from outright money creation (quantitative easing). The fact that those two uncoordinated policies pursued very close aims led to a realisation by some stakeholders (including us!) that the two policies might work better if coordinated.

Against this background, the European Economic and Social Committee – an advisory chamber of the EU – decided to set up an exploratory project called “European Industry and Monetary Policy. The role of the European Investment Bank”. The aim of the project was to determine “how far monetary and investment policies could, or could not, act together.”

Published in May 2017, the final report provides a convincing case for why such cooperation is needed. “It has become clear not only that there is no justification for a monetary policy that is uncoupled from the real economy, but also that developing the real economy should be an essential objective of monetary policy and that priority should be given to the particular link with the productive economy and growth”, the report’s introduction reads.

Monetary stimulus relies too much on banking sector intermediation

To come to this conclusion, the report first emphasizes a major pitfall of monetary stimulus programmes such as quantitative easing: they rely on a very dysfunctioning transmission channel: the banking sector.

“The project highlighted the importance of monetary policy’s indirect nature, as injecting/withdrawing resources into or from the real economy does not happen directly, but through the banking system, be it via interest rates, loans to financial institutions or supplying liquidity through the acquisition of assets.”

“What is shocking from a conceptual point of view is that this aid is not tied by any conditions requiring it to be used for the general interest, which is the intention.”

How to involve the European Investment Bank?

According to the report, “cooperation with the European Investment Bank (or other national or regional promotional banks or agencies) as an EU investment policy instrument is a practical and realistic way of effectively achieving these objectives. It would in particular enable the efficiency of monetary policy to be enhanced significantly, making it possible to achieve better results and greater impact on the real economy while mobilising fewer resources.”

The report outlines a series of recommendations to make such cooperation happen in practice:

According to the report, the envisaged proposals are legally possible under the current EU Treaty. What’s more, the report argues that linking monetary policy with the real and productive economy “is an essential and integral aim of price stability and of the set of monetary policy objectives laid down in the Treaty.”

The report argues that cooperation between the ECB and the EIB, including by providing resources from the ECB to the EIB, are possible and compliant with the current EU Treaty and the ECB’s independence.

“The independence of the Central European Bank is not an obstacle to the focus and proposals of the project, but rather a guiding criterion,” the report says. Consequently though, it says that any form of cooperation cannot be forced onto those institutions, but as to be mutually agreed by both. 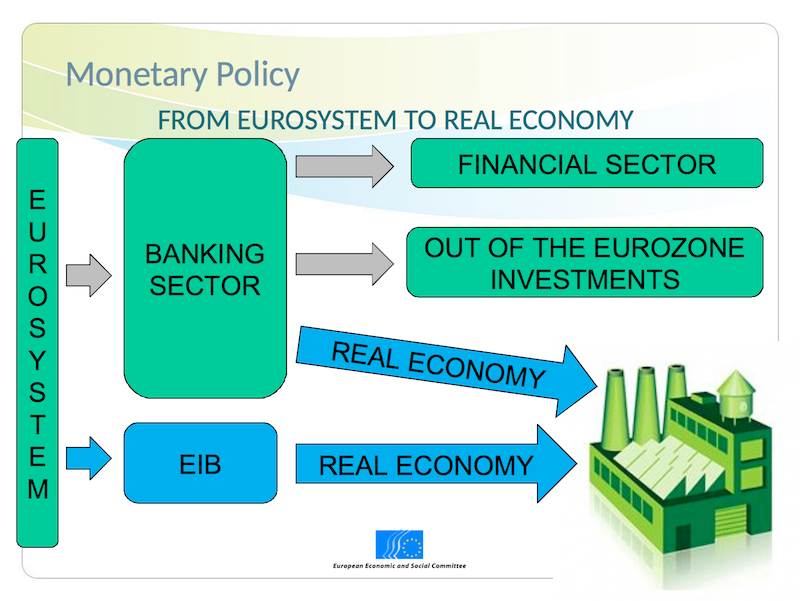 The report argues that ECB financing for the EIB would fall outside the monetary financing prohibition as laid down in Article 123 of the EU Treaty. If interpreted broadly, Article 132.2 of the TFEU entails that publicly-owned banks can access ECB funding, just like any other private bank. In fact this is already partly the case under quantitative easing, since the ECB is already purchasing bonds issued by the EIB.

Although some legal uncertainties have been identified on this point, Article 125 of the Treaty provides that the EU Council can “specify definitions for the application of the prohibitions referred to in Article[s] 123”. Such provision shall be used to make it clear to which extent the “supply of reserves” allows for structural funding from the ECB to the EIB.

A win-win deal for the EU

The EESC report provides a very useful contribution to the highly needed debate on improving the effectiveness of monetary policy in the Eurozone. The proposals being outlined are very close to what the QE for People campaign has been proposing under the name of “Strategic QE“ or “Green QE”. Both concepts aim at bridging the ECB’s stimulus policies with investments policies in the European Union.

It is clear that such an approach could constitute a win-win situation both for monetary policy and investment policies, and ultimately for the EU as a whole. Such structural cooperation between key EU institutions would allow a stronger support for investment in deindustrialized regions, and the competitiveness of key industries. And last but not least, it could be used to help finance the sustainable investments needed to deliver on the EU’s commitments to the UN Sustainable Development Goals, including to mitigate climate change.

We therefore strongly welcome the work of the EESC’s project committee and invite all EU Institutions to reflect on the conclusions of the report and consider turning its conclusions into actual policies.

Furthermore, we wish to encourage the EESC to deepen its work on the issue, in particular by launching an own initiative report looking at the effectiveness of monetary policy.