Unprecedented coalition of MEPs against the ECB’s lack of transparency 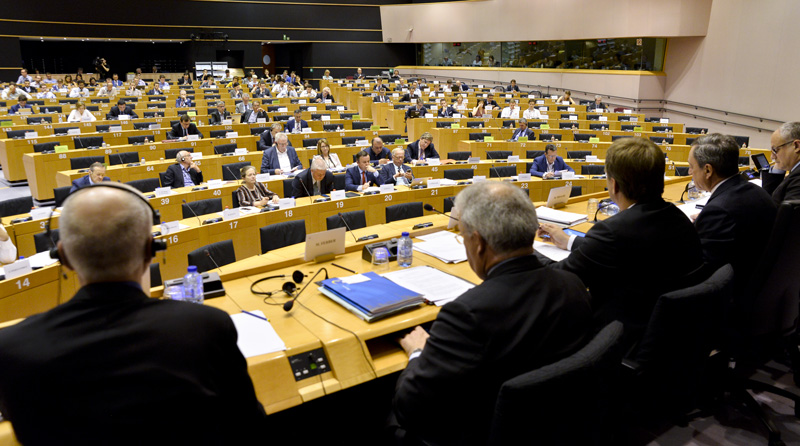 Last Monday the head of the European Central Bank was visiting the European Parliament for the quarterly hearing (so called “monetary dialogue”) with Members of the EU Parliament committee on Economic and monetary affairs.

Catalan MEP Ramon Tremosa took this opportunity to address Draghi regarding a written question signed by him and 14 of his colleagues which was leaked to the FT about two weeks ago. In the letter, MEPs are calling on the ECB to implement a series of measures to improve the transparency of its corporate sector purchasing programme (CSPP), whereby the ECB is injecting money directly into large European multinationals.

Very disappointingly, Mario Draghi refused to take any step in the direction of more transparency of the CSPP programme. Instead, he delegated this responsibility to the 6 participating national central banks. Fortunately, this provoked even more disappointment among MEPs, to the point that 23 other MEPs joined the initiative by co-signing the letter to the ECB, thereby increasing the pressure on the ECB. 38 MEPs have now signed the letter, an historically unprecedented level of signatures for an official written question to the ECB.

Now we are 41 @EP_Economics MEPs, not 15, asking for @ecb transparency pic.twitter.com/te6RSTh979

“Each purchasing NCB has discretion to decide whether it will publish any additional information” Draghi said. “We are of the view that the information provided by NCBs are sufficient” adding that “we see no reason to try to centralise the publication which certainly right now is completely in the hands of national central banks.”

Furthermore, he said: “We are not going to disclose the guidelines or to disclose the volumes because you would simply foster activity by market participants which could actually hamper the achievement of our objectives.”

You can watch the full video here:

Instead of addressing criticism, the ECB is dodging its responsibility to show commitment to transparency. What’s more, the only ECB justification not to disclose the company per company volumes of the CSPP holdings is very weak. We understand that the ECB doesn’t want to affect bond market dynamics on the short-term, but this does not prevent the ECB from disclosing the data with a certain delay, for example one month. We are not asking for real-time disclosure.

The ECB’s CSPP programme is only a minor part of its overall QE strategy, yet it is clearly the most controversial one. Recent research have shown that the ECB’s corporate bond programme is subsidizing fossil fuel sectors, confirming our very early warnings against this programme.

In February, 75 European NGOs co-signed our open letter questioning the ECB’s programme. We have been persistently calling for a more appropriate policy by the ECB, aligned with the EU commitment to mitigate climate change.

MEPs are rightly concerned too, and should take one step further by investigating whether transparency falls within the responsibility of ECB or national central banks, as Draghi claims.

If the ECB is so certain that this programme is justified and correctly designed, it should see no obstacle to being more transparent about it. This is the ECB’s best chance to pull the rug out from under the ECB critics of this programme. By refusing to do so, the ECB is fuelling even more criticism against itself.