MEPs want the ECB to look at helicopter money A group of 18 Members of the European Parliament have signed an open letter to Mario Draghi calling on the ECB to study the viability and implementation of helicopter money.

The letter, which is being delivered to the ECB on Friday morning (17 June 2016) ahead of Mario Draghi’s appearance at the European Parliament next Tuesday, encourages the ECB to carry out a full and in-depth analysis of alternative policies to quantitative easing. 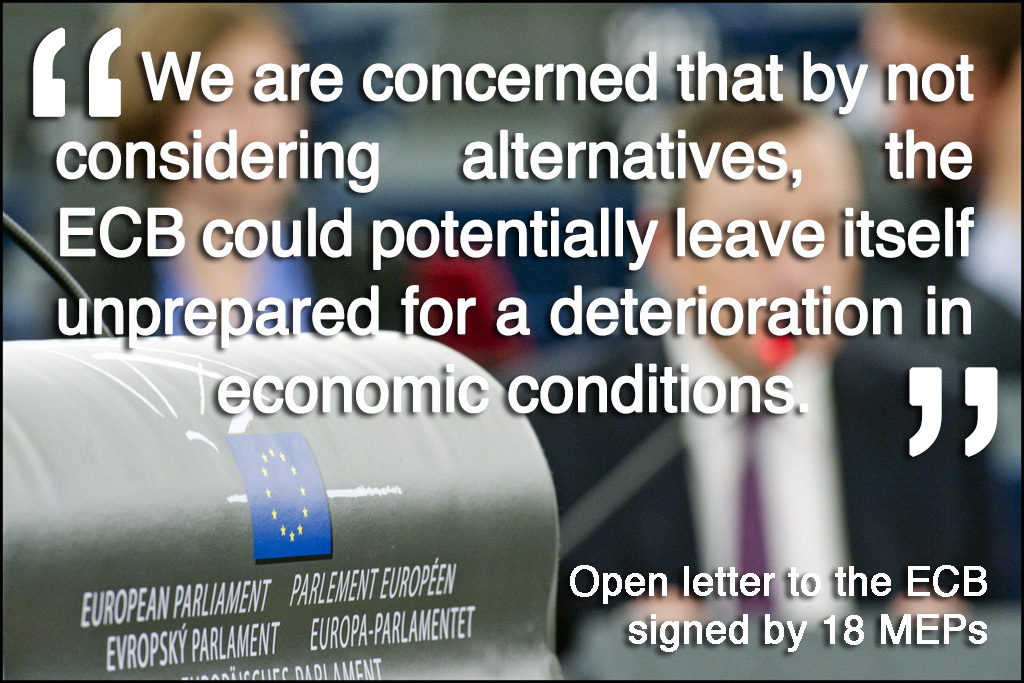 The letter puts forward two proposals, including a ‘green quantitative easing’ plan and the so-called ‘helicopter money’, a mechanism by which central banks would distribute money directly to individuals. It was co-signed by MEPs from 11 countries of the EU, including representatives of the Socialists and Democrats, the Greens, and members of the European United Left/Nordic Green Left groups of the European Parliament (see the full list below).

“This is a strong signal that an alternative to QE is needed, and that there is political appetite for discussing innovative monetary policy ideas,” said Stan Jourdan, the organiser of the campaign “Quantitative Easing for People”, which coordinated the letter with MEPs.

You can read the letter below:

At a time when the outlook for the eurozone economy is still looking uncertain, and when interest rates are at record low levels, we believe that now is the time for the ECB to consider what alternative monetary policy tools it has at its disposal. In particular we urge the ECB to carry out a full and in-depth analysis of alternative policies to Quantitative Easing (QE) via financial markets. Those alternatives would include the introduction of a citizens’ dividend, using ‘helicopter money’, and the buying of bonds from the European Investment Bank, as possible solutions to enhance economic development through direct spendings into the real economy.

As you have quite rightly stated in your response to a written question to one of our colleague, “helicopter money can mean different things to different people”, however many will accept the basic premise that it is a mechanism by which central banks would distribute money directly to (preferably low-income) individuals. We understand that in the past you have described the concept as “very interesting”, but that it is not something that the ECB is currently investigating.

As members of the European Parliament, we call on you to investigate these different and alternative policies. We are concerned that by not doing so, the ECB could potentially leave itself unprepared for a deterioration in economic conditions. Given your forecast that the ECB’s monetary policy measures will only bring back inflation at 2% by the end of 2018 after several consecutive years missing its target, it will become increasingly difficult for citizens to remain patient if alternative measures are disregarded. We believe that by seriously considering these alternative tools, the ECB would send a great signal of ambition and commitment.

We share the ECB’s view that in order for monetary policy, to be effective, it should be complemented by an expansionist fiscal policy. However the prospects for a significant fiscal stimulus coordinated at the EU level are, unfortunately, very limited in the short term, due to the current political and institutional framework. For this reason, it falls on to the ECB to show leadership in this discussion.

You recently cited the potential legal obstacles to the deployment of helicopter money. However, several eminent economists have already outlined how helicopter money could be distributed directly by the ECB, without going through government accounts and remaining in compliance with the EU Treaties. We would be very happy to discuss further with you, and to provide further references, in order to allow you to provide evidence-based analysis of the potential effects of the alternative proposals mentioned above, and to clarify under which conditions their implementation would be legal.

You have previously given reassurance that the ECB will “do whatever it takes” to achieve its mandate. If the ECB is to be prepared for every eventuality, it must dedicate significant expertise and resources to studying the viability and implementation of innovative policies, whilst preserving the ECB’s independence and accountability. You can count on our full support in making this happen. Sincerely,

Helicopter money drew an unprecedented level of attention in March after Mario Draghi said it was a “very interesting concept”, before asserting that the ECB was not considering it, in a letter to Fabio De Masi MEP (GUE/NL, Germany).

At the ‘monetary dialogue’ before the European Parliament’s Committee on Economic and Monetary Affairs (ECON) on Tuesday afternoon (livestream), Mr Draghi will have the opportunity to assuage MEPs’ concerns and show that the ECB is investigating all available options.

“The letter is an outstretched hand to the ECB to open up the discussion on policy alternatives with the Parliament. We hope that Mr Draghi takes up their offer,” Stan Jourdan said.