In contrast to the European Central Bank’s conservatism, central banks in emerging and developing countries are far more innovative when it comes to supporting financial policies to mitigate climate change.

Climate change is back on the news agenda with the annual Conference of the Parties, COP23, currently taking place in Bonn. Two years ago, the historic agreement reached in Paris saw countries around the world commit to emission reductions.

COP23 is aimed at framing the implementation of the Paris agreement and accelerating the green transition, including by “making all financial flows consistent with a pathway towards low-emissions, climate-resilient development.” The global investment required amounts to trillions worth of pounds/euros/dollars on an annual basis.1 Mobilising that funding will take a concerted effort, with all institutions and actors playing a role.

Furthermore, climate change will have a tremendous impact on financial stability. As explained by the Bank of England (BoE), the risk that climate change will play on financial stability are twofold: physical risks, which can arise from climate-related event, and transition risks, which can arise from the process of adjustment towards a lower-carbon economy and  the consequences on financial market of the consecutive reallocation of tens of trillions of dollars of investments! Those risks can’t be ignored by central banks.

As we argued in a recent piece, central banks are in a powerful position to steer the financial sector towards climate-friendly investment, especially when they implement policies consisting in injecting billions into the financial sector. Yet, central banks in Europe have shown great reluctance to engage with climate policies. For example, Mario Draghi recently made no commitment to reduce the purchases of fossil fuel bonds under quantitative easing.

Check out some of the most exciting initiatives that central banks have taken to do their part in the necessary fight against climate change.

Known as one of the most interventionist central banks in the world, the Bangladesh bank’s green central banking activities cover almost the entire range of potential policies.

As part of the BB’s green credit allocation policies, commercial banks and other financial institutions (NBFIs) are required to allocate 5% of their total loan portfolio to green sectors. There is also a range of green re-financing lines subsidising green lending, including to renewable energy and energy efficiency projects (solar home systems, biogas, improvement in brick-kiln technology, etc.). About green prudential regulation, the BB required lower equity margin requirements for Environmental & Social (E&S) favourable projects. The BB also issued Policy Guidelines for Green Banking in 2011 and designed a mechanism to incentivise banks compliance to those guidelines by offering them preferential treatment when they do so.

The Bangladesh central bank has clearly played a key role in helping to green the Bangladeshi banking and financial system.

China’s approach to greening the financial system and the wider economy is one of the most ambitious, thanks to a high degree of coordination between different government bodies which started around 2007.

The PBC has become a central agent in mainstreaming green finance in China by working hand in hand with a broad range of different institutions like the China Banking Regulatory Commission, the Ministry of Environmental Protection, the Chinese Development bank and so on. While each institution focuses on their respective competence, they work closely together on their policy implementation, thereby initiating a broad approach that addresses both credit and capital markets and all levels of governance. Most green finance policy initiatives stress both the reduction of emissions through the restriction of funding for certain parts of the economy, and the provision of loans to finance the green infrastructure.

The Central Bank of Brazil – Banco Central do Brasil (BCB) – has been at the international forefront of green prudential and macroprudential policy implementation since 2011. It has successfully mainstreamed Environmental & Social risk management through binding regulation (such as the BCB’s mandatory 2014 guidelines Social and Environmental Responsibility for Financial Institutions) and by requiring banks to conduct stress tests, simulating the impact of environmental damages on their balance sheets, and then assessing capital adequacy based on E&S risk exposure.

These policies have a large impact on banks’ behaviour. The majority of banks are now incorporating Environmental & Social risk into their reporting and risk management strategies. Banks are now also asking their customers for documentation in regard to environmental and social aspects, such as environmental licensing, and scrutinising projects in regard to so-called slave labour blacklists.

Whilst relying on banks’ own assessment of risk in the implementation of capital requirements may not be the best option, the BCB is still now in a much stronger position to see the emergence of systemic risks across the economy.

The Reserve Bank of India (RBI) has followed its tradition of interventionist approach by maintaining a dual approach: guiding credit to priority sectors but also relying on industry-initiatives for green finance guidelines.

Based on the Banking Regulations Act from 1949, the RBI’s Priority Sector Lending Programme (PSL) concurs to the objective of allocating credit to some vulnerable sector like agriculture, infrastructure, education and micro, small and medium enterprises. By a range of measures such as guidelines and quotas, the RBI ensures that 40% of commercial bank lending goes to those sectors. In 2012 and 2015, the RBI included loans for renewable energy projects or social infrastructure into its priorities. Those loans can be used to finance projects for solar or biomass based power generators, wind mills, micro-hydro plants, etc.

Consequently, lending to renewable energy projects has grown at a higher rate than overall credit growth in the 2009-2014 period. However, the impact of the PSL has been mixed as many banks fail to achieve their annual PSL targets.

Lebanon’s central bank has experimented with differentiated reserve requirements. In practice, reserve requirements act as a limitation on private banks’ capacity issue loans. The Lebanese Center for Energy Conservation (LCEC), a governmental agency, ran a National Energy Efficiency and Renewable Energy Action (NEEREA) scheme in conjunction with the Banque du Liban to encourage loans for energy efficiency projects. If a bank can demonstrate a project helps achieve energy savings, a LCEC certificate entitles them to lower their reserve requirements by 100-150% of the loan value.2

Reserve requirements are one form of macroprudential regulation that can be used to incentivise green investment. But the rationale for their use need not draw on the benefits of a low-carbon economy; higher reserve ratios are justified on the basis of higher risks arising from unsustainable projects.

There are precedents for central banking policies geared towards energy investments in Europe too. The Bank of France’s monetary policy between 1974 and 1984 was aimed at promoting the energy transition in the face of the oil shortage that manifested violently in October 1973 after the first oil shock. This financial policy implemented by the Ministry of Finance and the Bank of France in the face of the energy crisis, promotes the direction of bank lending towards energy, through an exceptional derogation to the credit limitation mechanism. The steering mechanism of monetary creation in force at the time called “credit supervision” (encadrement du crédit in french). In 1984, the French banking system was subject to a major reform, which put an end to this system of “credit supervision.”

The Bank of England is legally bound to “identify, monitor, and take action to remove or reduce risks that threaten the resilience of the UK financial system”. Consequently, the BoE is engaged in an ongoing examination both of “the physical effects of climate change and the impact of changes associated with the transition to a lower-carbon economy” as quoted in an article from the Bank’s Q2 2017 Quarterly Bulletin. Acknowledgment of the great risk climate change poses to the financial stability and its consequences for the role of the central bank is an important first step. However, for the moment, little has changed in practice or policy at the BoE. Their main focus is still on engaging with regulated firms on climate-related risks through prudential supervision and supporting the work of cross-national initiatives, such as the Task Force on Climate-related Financial Disclosures (TCFD) and the G20 Green Finance Study Group.

The current UK government is seeking to expand the City of London’s function as a centre for green finance, embed ‘clean growth’ at the heart of its industrial strategy, and meet a series of statutory targets for carbon emissions. The Bank could play a substantial role in achieving these objectives; at the very least, monetary policy and financial regulation should not make them harder to achieve. An asset purchase programme that targets green bonds might help grow the market for green finance in London. And the Financial Policy Committee should consider whether voluntary disclosure is really enough to prevent banks making long-term risky investments. 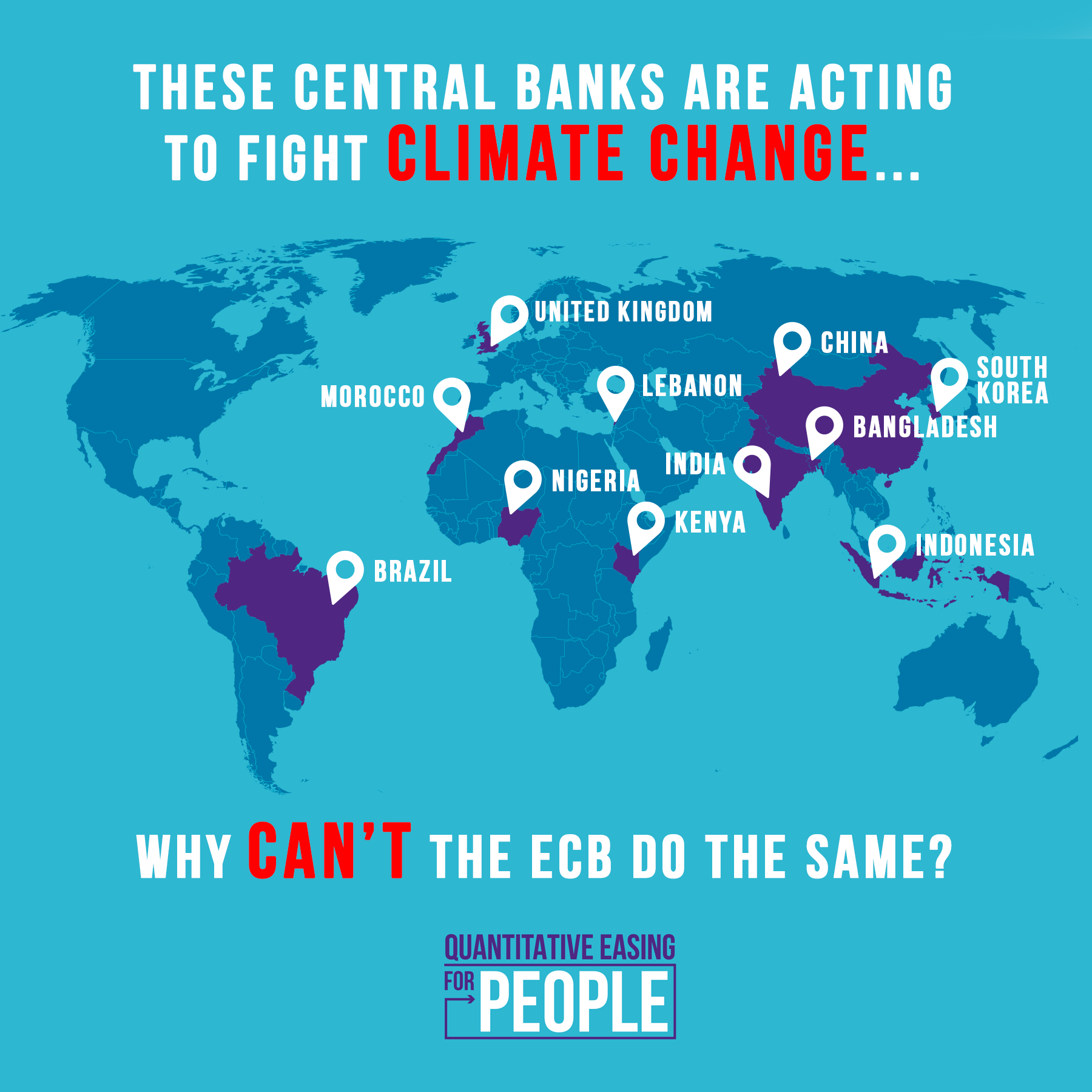 7 Rethinking the role for central banks

China, India, Brazil and many other emerging economies do not hesitate to use their Central Banks to direct credit towards sustainable investments. By contrast, advanced economies typically remain wedded to a limited form of central bank independence that prohibits any such involvement in the flow of funds in the economy.

European and Western countries are stuck in an ideological position that prevents the use of a powerful institution to help solve the challenges we face today.

The scope of action taken by central banks has never been set in stone. On the contrary, it has changed several times since the establishment of the first such institution. The form of central bank independence we know in Europe is by no means a necessary arrangement, but a political choice made in a specific historical and geographical context. Only intellectual laziness prevents us from setting up institutional arrangements making central bank independence compatible with green policies.

In the Eurozone and the UK we are currently feeling the costs of that choice: rising inequality, asset bubbles, and a growing burden of debt. Meanwhile, governments claim they lack the means to invest fully in the fight against climate change and broadly into green finance. Those are issues on which CBs could act, as they are elsewhere.

It is time to rethink the role of central banks. This is not to say that the developing world CB model should be duplicated exactly. But advanced economies have much to learn from developing countries’ innovative and ambitious approaches when it comes to sustainability.

When the scale of the sustainability challenge is so vast, we are at risk of doing too little, too late, all thanks to an ideological straitjacket.